The Netherlands population, in 2009, recorded a growth rate of 0.4%, to be attributed to the natural increase of the population, in which the mortality rate (8.7 ‰, in 2009) is lower than the birth rate (10.6 ‰, in 2009), although it has dropped in recent years (in the 1990s it was on average 13 ‰). The migratory balance is 2.46%. Immigrants come mainly from non-European countries, such as dependencies (Netherlands Antilles and Aruba), ancient colonies (Suriname and Indonesia) and some non-European Mediterranean countries (Morocco and Turkey). The population with foreign origins (first or second generation) is equal to about 19% of the total, a high percentage that also derives from the centuries-old tradition of tolerance and respect for human rights typical of the Netherlands. Indeed, many requests for political asylum continue to be accepted, despite the fact that since 1995 (the year in which restrictive measures were introduced), they have been decreasing.

The average density (calculated without taking into account the vast surfaces occupied by inland waters) is 484 residents /km 2, the highest among European countries, without prejudice to the totally urban microstates of the Principality of Monaco and the Vatican City and of the Maltese island state. Over a third of the Netherlands population is concentrated in Randstad Holland, a circular conurbation, open to the south-east, which includes the urban agglomerations of Amsterdam (1.5 million residents), Rotterdam (1.2 million), The Hague (900,000), Utrecht (600,000) and other cities. Despite the importance of rural areas for the country’s economy, the urban population exceeds 80%, divided into a polycentric network of cities.

The per capita GDP, about 40,000 dollars, places the Netherlands among the first states in the world for individual income, after Luxembourg, Norway, United States and Switzerland. After going through a period of recession in the early 2000s, the economy recovered until 2007 but since 2008 it has suffered a new stop, as a result of the global crisis. The GDP comes for 74% from the tertiary sector, 24% from industry and 2% from agriculture. The employees in the various sectors coincide with the GDP produced only for agriculture (2%), while those employed in industry are 19% of the total and those in the tertiary sector are 79%. As in the previous decade, it is still industry that provides, proportionally to the number of employees, the greatest contribution to GDP, however the tertiary sector shows evident growth, a sign of greater requalification of services and greater innovation in the industry, which uses directly or indirectly the services themselves. The unemployment rate,

Industrial activity predominates in the agri-food sector (butter, cheese, beer, sugar, chocolate), in chemistry, in oil refining (near the port of Rotterdam there is, among other things, the largest hydrocarbon deposit in the ‘Europe) and electronics.

According to smber, agriculture, highly mechanized, produces largely for exports. The reclamation, now completed, made it necessary to rationalize the agricultural spaces, as there is a competition in the use of the land with other activities. Agriculture is designed to compete on international markets, despite unfavorable climatic conditions. For this reason, greenhouse horticulture has had great development, among which products are tomatoes, cucumbers and peppers. Floriculture is one of the traditional sectors of the Netherlands. Bulbous flowers (and bulbs) are mainly cultivated. The tulip, in particular, introduced from Asia in the 17th century, has become the symbol of the country. Most of the agricultural land (approx.40% of the total) is covered by pastures, which prevail (70% of the territory) in the province of Friesland (north-west of the country). Friesland itself is also at the top of sheep farming (18% of the total). The breeding, more and more intensive and rational, however, mainly concerns cattle (for milk, for the production of cheeses, but also for meat) and pigs. The latter represent one of the many export items in the agri-food sector, with frozen pork legs used, also in Italy, for the production of hams.

Tourism is an important source of income. The number of international arrivals, although considerably lower than in other European destinations such as France, Spain or Italy, still stands at around 10 million, representing 2.3% of the total international tourist flows in Europe. Business tourism has a certain importance compared to leisure tourism. The attempt to increase the number of visitors is carried out through the creation of great artistic-cultural events (such as in 2006 the events for the 400th anniversary of Rembrandt’s birth).

The Netherlands have a centuries-old commercial tradition that is expressed by its ports, among which those of Rotterdam and Amsterdam stand out. The port of Rotterdam is one of the most important in the world. Located at the mouth of the Rhine and Meuse rivers, it is connected to at least a thousand other ports: the volume of goods amounts to about 370 million tons (oil and petroleum products, iron ore, coal and food are the most important goods handled), largely containerized. The port area, together with the industrial area annexed to the port, is 40 km long and has an extension of over 10,000 hectares. Among the most important and interesting features of the port of Rotterdam is that, once unloaded, the goods can be distributed again throughout Europe with different modes of transport: road, rail, inland waters (especially the Rhine), small-scale coastal vessels and pipelines (an underground network connects it to all of Western Europe). Therefore, on the same day they are unloaded, the goods can reach Germany, Belgium, France or Great Britain. The port of Amsterdam (which also includes the ports of Zaanstad, Ijmuiden and Beverwijk) has a shorter range than that of Rotterdam even if it performs an important function of connection with many European and world ports.

Artifacts and other finds that document the human presence in the Meuse valley and in Limburg, where, with primitive techniques, man devoted himself permanently to agriculture, date back to the Neolithic period. Around 2500 BC more advanced peoples entered from the east, mixed with the Celts, who came from the south, and the Frisians, from the north and east. 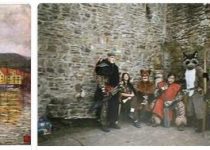