In recent years a lively archaeological activity has developed particularly in the eastern part of the Rhine delta, where numerous sites of the late Iron Age have been identified and explored. In almost all cases the traces of the inhabited areas are essentially marked by the presence of a large number of holes for poles, distributed on the ground in several nuclei. This is a phenomenon common to the settlements of the middle and late Iron Age, but which is also found here in those of the Roman age, as occurs in Heteren-Het Lage Land and Heteren-Uilenburg. More complete remains of houses from the Middle and Late Iron Age have been found at Ede-Maanderburtweg, north of the Rhine. celtic fields.

According to smber, most of the archaeological research in the Netherlands concerns the Roman age and in particular the numerous castellas that lined the limes. At the end of the 1980s, emergency excavations were carried out in the vicus and burial ground of Valkenburg, a castellum dating back to 43 AD legionaries, which appears larger and more irregular than originally assumed. The data emerging from the excavation of the built-up area around Valkhov, generally identified as Batavodurum od oppidum Batavorum, are also interesting., from which it appears that the site was originally a canaba legionis.

Very important are the results of the research carried out in 1979 in Arnhem-Meinerswijk, where a military camp was found which is in addition to those, already known in the area of ​​the Rhine delta, of Vechten and Velsen and to what is supposed to have been in Bijlandse Waard. In Meinerswijk, six successive periods of occupation have been ascertained to be placed between 20 BC and the 4th-5th century AD, and it is probable that the first phase of the encampment is related to the campaigns led by Germanicus in 16 BC. on the basis of a graffiti, it was assumed that the soldiers of the legio V Alaudae stationed there for a certain period. In the Claudian age the camp was incorporated into the limes of Germania Inferior. The first stone buildings date back to the Flavian age while a complete reconstruction of the field is ascribed to the 3rd century AD and, from what is obtained from an inscription and some brick stamps, it seems to be attributed to the legio I Minervia. On the basis of the Tabula Peutingeriana it is plausible to support the hypothesis that this camp corresponds to Castra Herculis, one of the seven cities fortified by Julian in 359 AD. Other military camps along the limes have been excavated in Driel and Loowaard.

In the 1980s, the research program relating to the Gallo-Roman villa of Voerendal continued, with particular regard to its territory. The new data confirm the occupation of the site from the 1st century AD to the beginning of the 8th century AD Excavations also in Maasbach, on the right bank of the Meuse, have uncovered the remains of a Roman villa consisting of a residential and from outbuildings. The main nucleus has two construction phases: at the end of the 1st or the beginning of the 2nd century AD, a rectangular building preceded by a gallery dates back, while at the end of the 2nd century AD a side wing and a corner tower.

Archaeological excavations in the Netherlands are mainly carried out by the Amersfoord State Service for Archaeological Soil Research (ROB), the Institute of Archeology of the Utrecht State University, the Institute for Ancient History and Archeology of the University of Nijmegen (IOGA) and the Albert Egges van Griffen Institute for Prehistory and Protohistory of the University of Amsterdam (IPP). The ERA (Eastern River Area) carries out large excavation projects on an area of ​​about 1700 km around Nijmegen, with particular attention to the period from 250 BC to 750 AD. 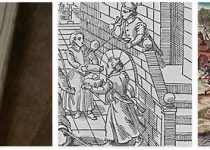